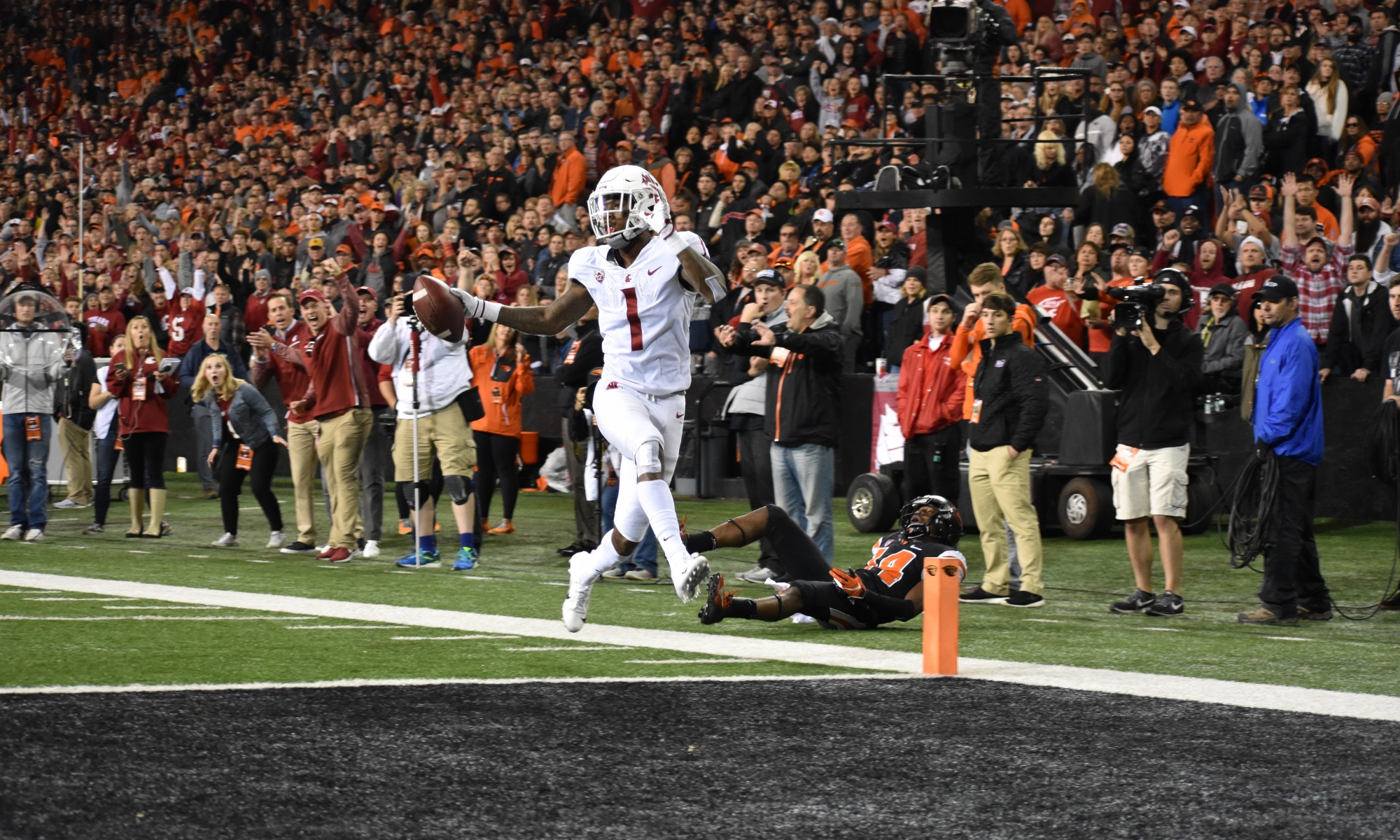 CORVALLIS – A beautiful fall evening in Corvallis opened as a one sided affair but stirred a bigger scare than initially anticipated. While the first couple minutes of play previewed an egregiously lopsided affair, the 34,000 fans in attendance witnessed a different tale.

The Washington State Cougars (5-1) met Oregon State (1-5) in Reser Stadium for a Pac-12 north clash and got all they could handle before emerging victorious by a 56-37 margin.

“I thought they would be aggressive, but not to that extent,” admitted Head Coach Mike Leach to the media.

After Washington State jumped out to a two-possession lead on just three offensive plays from scrimmage, freshman halfback Jermar Jefferson and the rest of his Beaver crew grew increasingly more recalcitrant.

Jefferson’s commanding 139-yard performance complimented his 4 trips to the end zone and kept the matchup too close for comfort in the eyes of the Wazzu faithful. The only blemish pinned on the true freshman’s outing was a lost fumble inside Washington State’s 10-yard line that resulted a touchback in favor of WSU.

“The defense made a lot of big stops when we really needed them to, and we knew we had to take advantage of that,” quarterback Gardner Minshew II said in his postgame presser.

On the occasion that Oregon State got a whiff of the lead, the WSU offensive unit flexed their game on command executing seamlessly to regain their prominence within the following drive.

Oregon State earned their first lead with just minutes left before halftime. Fittingly, Minshew II began conducting surgery on the Beaver secondary. He and receiver Tay Martin moved the Cougar offense into scoring position in just a handful of plays.

Ironically, the Cougs stalled out upon entering the red zone. And a do or die third-and-goal situation from the 15-yard line was doing Wazzu no favors. That is until James Williams took a check down across the plane by pinballing off a pair of Beaver defenders.

“Anytime we have our backs against the wall, we come out swinging,” Minshew II said.

The Washington State defense had no easy task when asked to combat an elusive offense led by OSU’s first-year Head Coach Jonathan Smith. The former Washington offensive coordinator pulled out all the tricks he could muster up. From onside kicks to double-reverse passes, Oregon State’s aggression – much like their chainsaw chants – teetered on the line of gimmickry.

“They ran a lot of trick plays,” defensive lineman Taylor Comfort said. “If you take care of everything else they can’t beat you with trick plays.”

Sixth-year senior Peyton Pelluer did just that. Per usual, he led the defense by recording 11 tackles. It is the 11th time in his college career that the standout linebacker recorded double digit figures.

On the flipside of the ball, Washington State showed no signs of an identity crisis. Despite playing the nations worst statistical rush defense, the Cougs called only 14 designed runs when excluding garbage time. This proved to be no problem as the Air Raid connected with 10 receivers for 430 yards and 5 touchdowns in a winning effort.

“I just do what I do to try and help my team,” receiver Tay Martin said.  “I just want to win.”

Washington State moves to 5-1 overall and enters their bye week 2-1 in conference play. With five wins under their belt, the Cougs host Oregon on October 20 in Martin Stadium for a chance to become bowl eligible for the fourth season in a row – a first in program history.

Q1 1:21 – WSU 14, OSU 14
After recovering a muffed pooch punt inside the Washington State 10-yard line, Jermar Jefferson knotted the game up by virtue of a 7 yard rush. (Choukair kick good)

Q2 0:34 – WSU 28, OSU 24
Minshew II checked down to James Williams on third-and-goal from the 15 yard-line. Williams plays slalom with the Beaver defenders and forces his way into the end zone regaining the lead. (Mazza kick good)

Q3 12:10 – OSU 30, WSU 28
The Beavers take their first lead of the half by moving the opening into the end zone on a 1-yard surge by Jermar Jefferson. (Choukair kick missed)