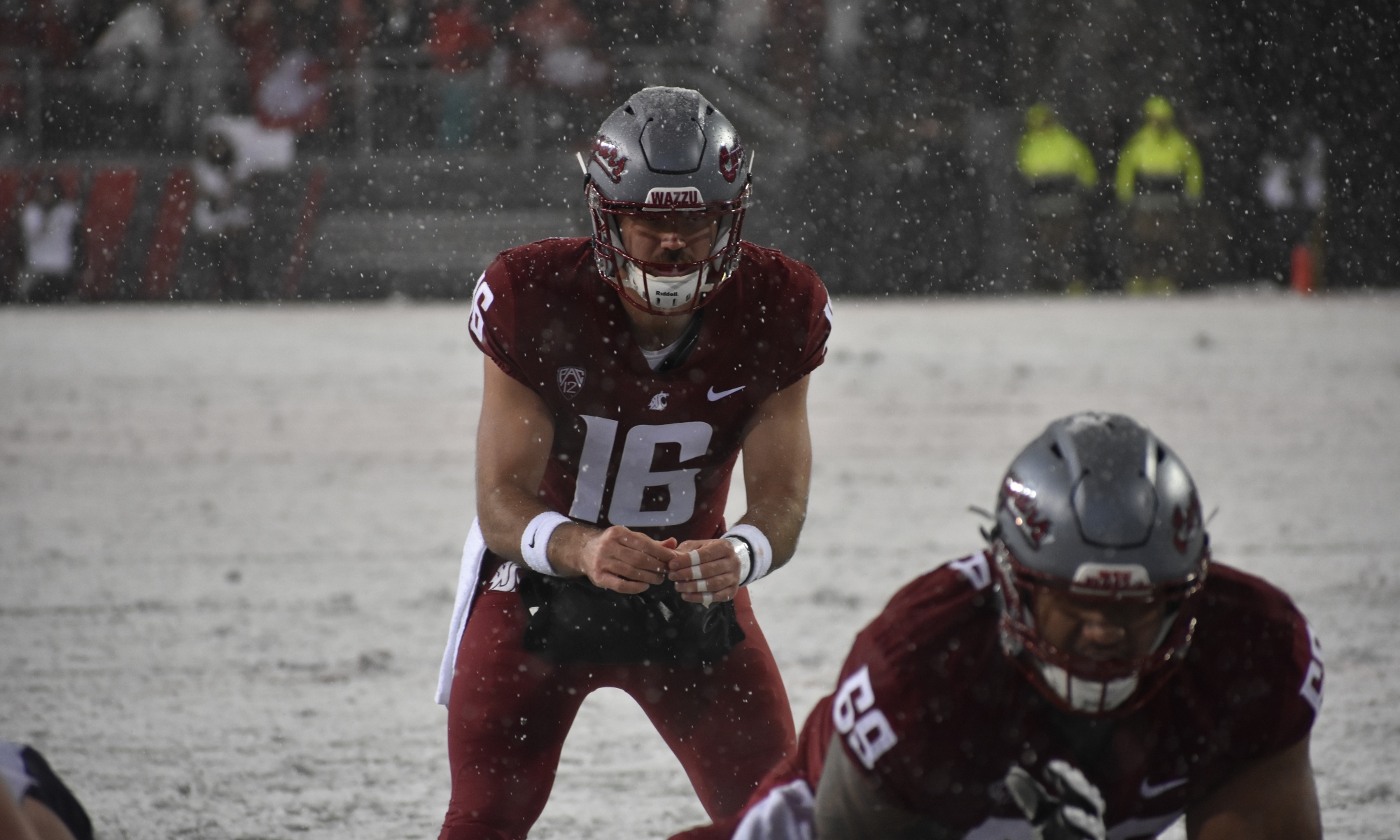 It was our year, until it wasn't.

PULLMAN – A blank sheet of paper. That’s what the field was Friday night in Martin Stadium courtesy of undying snowfall. Likewise, so was star quarterback Gardner Minshew II’s memory bank of the opposing purple and gold having never squared up with the Washington Huskies.

But all good things must come to an end. The Mississippi Mustache left the night with anecdotes that predecessors Luke Falk and Connor Halliday would find all too relatable.

“If you want to reduce football to the lowest common denominator: blocking and tackling. I thought they beat us in both of those.”

From the 1992 throwback jerseys to the trademarked weather, everything but 60 minutes on the gridiron held up its end of the barging. Even snow banks bordered the east end zone’s backline. But like years past, WSU appeared to be left shadow boxing ghosts, not the Washington Huskies.

But unlike past short comings, the Cougs hung around much of the night trailing 20-15 entering the fourth quarter. But as if right on cue, a patient Myles Gaskin took a delayed handoff between the tackles 80-yards on a picturesque house call fit for a post card effectively slamming the door shut on any hopes of a Cougar comeback.

However, the Cougar defense did force three turnovers: a Skyler Thomas interception, a Dillion Sherman fumble recovery, and a 2-point PAT return courtesy of Hunter Dale. And while it helped – 9 of WSU’s 15 points coming off turnovers – Washington State sacrificed most opportunities by tossing two picks and losing a fumble of their own.

Perhaps no bigger key to success for Washington was the heavy lifting done by their offensive line to the benefit of workhorse tailback Myles Gaskin. The senior has proven to be oxygen for Chris Petersen’s anti-cougar formula taking 27 carries for 174 yards and 3 touchdowns.

Unstoppable in itself boasting 6.3 yards per carry, it set up the Dawg’s all-time winningest quarterback Jake Browning for the easiest 207 yard outing since the invention of the bubble screen. Believe it or not, the senior signal caller threw no more than 14 passes – completing 11 – to conclude his final chapter in Apple Cup lore.

Citing his defense as reliant on speed more so than size, coach Leach did concede the weather “mitigated” a pertinent Cougar strength.

And what’s a big-time Chris Petersen matchup without the double pass? A trick play that may as well have been invented by the storied coach has become somewhat of a staple in his offense rather than a gimmick. Picking his spot perfectly, receiver-turned-quarterback Aaron Fuller hooked up with a wide-open Bryant Hunters to extend the Husky lead by double digits.

Coach Leach said postgame that Petersen has made an identity of shifts and movements to “gain leverage” in their normal offensive playbook. By his estimation, it seamlessly disguises their coveted trick play.

“That’s kind of the core of their offense, so when they pop that on somebody it’s more effective than when other people do it,” Mike Leach said.

As for the Cougs offensively, James Williams shined his brightest. The redshirt junior featured both of WSU’s trips to the end zone carding 11 rushes and an additional 7 receptions. And you wouldn’t know it by the eye test alone, but Williams impressively checked in on the official stats sheet with 5.9 yards per carry.

Peyton Pelluer, to the surprise of none, impressed in his Martin Stadium finale. Earning player of the game honors, the defensive captain once again tallied double digit tackles – 7 unassisted and 1.5 for loss.

Perhaps dying along with Washington State’s shot at a conference championship was Gardner Minshew II’s bid at Heisman race. Playing below the mark, the quarterback could only muster 154 yards on 35 passing attempts. A completion percentage north of 74 percent was merely a byproduct of rushed reads and progressions that resulted in checkdown of 3 or more yards at best.

Washington State has reached the conclusion of their regular season schedule. A phenomenal year to say the least, their work remains unfinished as the program now waits to hear word of a Bowl bid.

Q2 0:33 – UW 14, WSU 7
Veteran halfback James Williams answered pushing an 11-yard touchdown rush down the throat of Washington’s secondary to get Wazzu on the board. (Blake Mazza kick good)

Q4 12:30 – UW 28, WSU 15
Gaskin rakes in an 80-yard touchdown call in what appeared to slam the door shut on Washington State’s hopes of a comeback. (2-point conversion good)