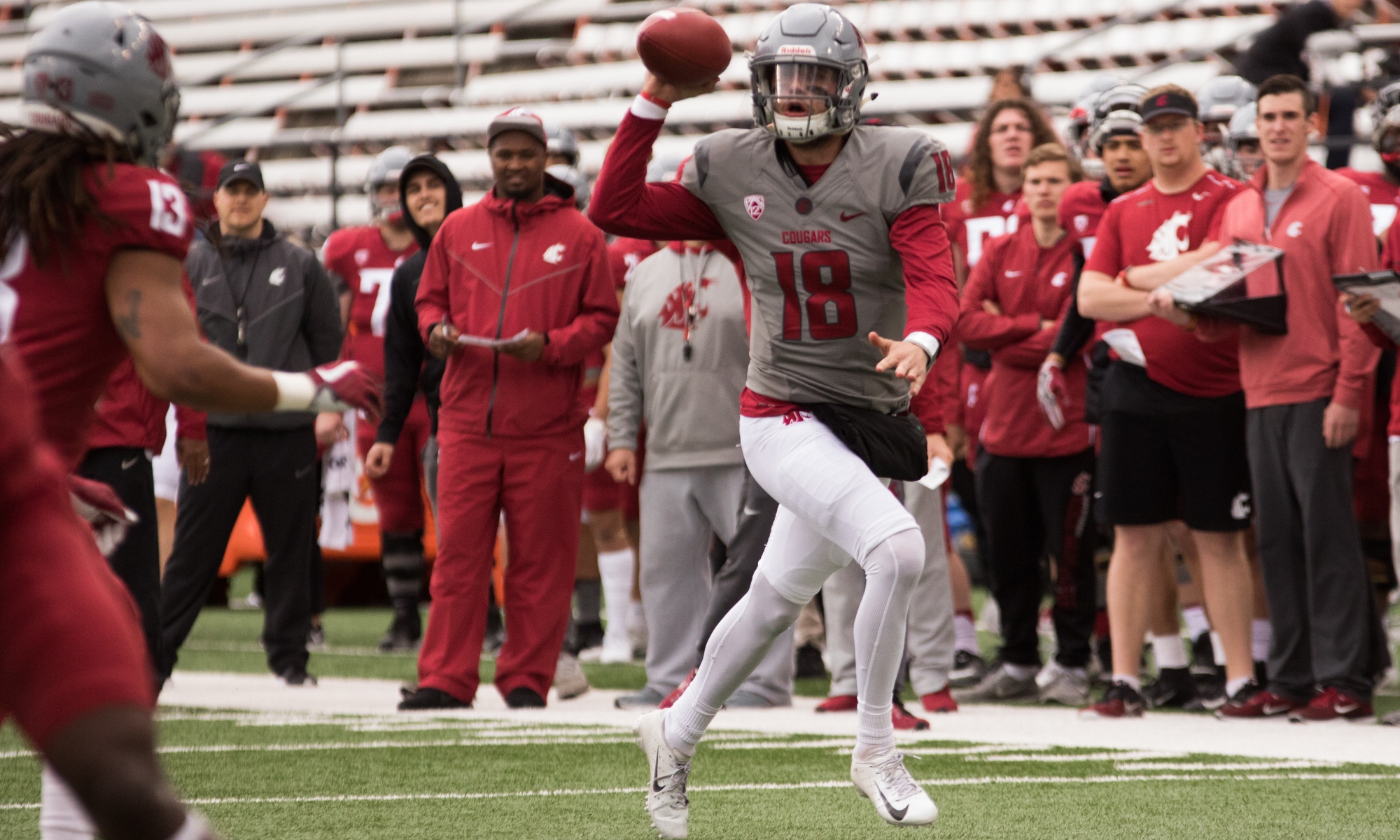 PULLMAN – If Saturday afternoon was an audition for starting quarterback in front of 5,059 fans, redshirt senior Anthony Gordon should expect a promotion. In just one half, the 6-foot-3 gunslinger completed 21 of 30 passes for 234 yards, 3 touchdowns, and 1 interception.

Both “Crimson” and “Gray” rosters saw a mix of first and second string talent, but as always with an Air Raid offense, all eyes were behind center.

Showing an adept ability to step up in the pocket, drive the ball downfield, extend plays with his legs, and throw receivers open, Gordon looked immortal until his late second quarter interception at hands of George Hicks III off a deflection.

“Gordon threw the ball well. I like how he escaped the pocket, made plays, and worked the scramble drill,” receiver Travell Harris said. “That’s what helps makes this offense more dangerous.”

Gordon’s top target resided in Harris who took his 7 receptions for 103 yards – this was highlighted by a 33-yard second quarter bomb. Gordon continued to find comfort in Easop Winston Jr. – former JuCo teammate – who pulled in 7 catches of his own for 52 yards.

Numerous times we saw the pocket collapse only to No. 18 sliding northward to deliver a well thrown and calculated ball. And at times where he evaded lateral pressure, the savvy California native found ways to throw receivers open – the most notable of which came in the changing of his arm angle to work around a defenders.

“Gardner [Minshew] has given me some tips on how to further extend plays without really scrambling,” Gordon said. “Throwing from different arm angles kind of came from playing baseball. Changing up the arm angle and getting the ball out quick is something I’ve always been okay at.”

Gordon’s two other touchdown calls came on a 2-yard cross to Calvin Jackson Jr. and an 8-yard hitch to Kassidy Woods. Both of which occurring in the first quarter. Gordon and the “Gray” found the end zone on all three of their opening drives.

“Things felt smooth for a game where they weren’t blitzing too much,” Gordon said. “It’s a lot of fun to compete with all the guys out here, overall a good day.”

Fellow redshirt senior Trey Tinsley opposed Gordon in the first half of play. His meager 8-16 mark behind just 107 yards, 1 score and 2 interceptions was nothing scoff at, however.

“I thought Trey was tentative at times,” Mike Leach said. “We were understandably inconsistent. Anytime you split the roster, that happens.”

He bounced back in the second half’s opening possession though behind a 9-play, 75-yard scoring drive.

“I thought Trey looked good,” Gordon said. “He’ll make his adjustments and fire back on tuesday.”

Raising sophomore Cammon Cooper saw the majority of second half reps for both squads eerily resembling one playing chess against themselves. His combined stat line for both teams weighed out at 12-19, 106 yards, and 2 interceptions.

He was mobile, only giving up a pair of negative plays, but seemed unable to constantly move the chains. Sporadic play showed the ceiling and the floor of his abilities. But make no mistake, the southpaw can sling it when he’s on target.

Leach told the press postgame he was pleased with the overall effort given by both teams despite negative plays and some guys trying to do too much.

The event was sponsored by BECU and raised $51,830 for the ASWSU Coug Health Fund, a program at WSU designed to assist in Mental Health and Sexual Assault Prevention.